The electronic scanning ensures that even moving objects at speed can be tracked.

The Underwater Sonar Head has active sonar transmit/receive transducer arrays along with interfaces for electrical power and data signal transmission through an underwater cable back to the control system on the surface.

The Surface Display Processor receives the raw data from the Underwater Sonar Head thru high speed data links in the underwater cable. The raw sonar data is processed to generate a detection matrix and raw sonar image display for the full 360° degree sector view.

All the raw data can be saved to a standard hard disk for later analysis. 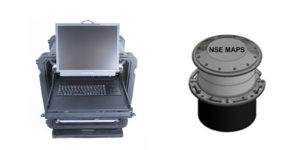